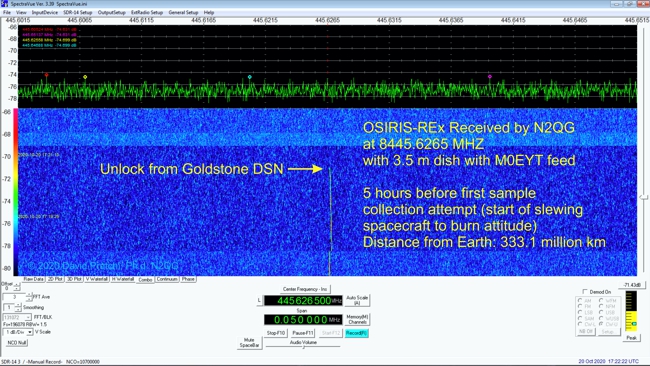 I caught the last transmission of OSIRIS-REx with its high-gain antenna pointing towards Earth before it started to slew to its burn attitude.  A few minutes later Goldstone reacquired it but at -154 dBm, which is much too feeble for my amateur DSN system.

The system is running automatically at home with me monitoring it from work. 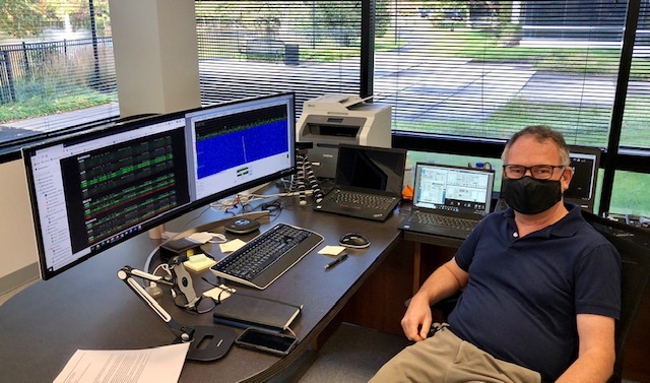 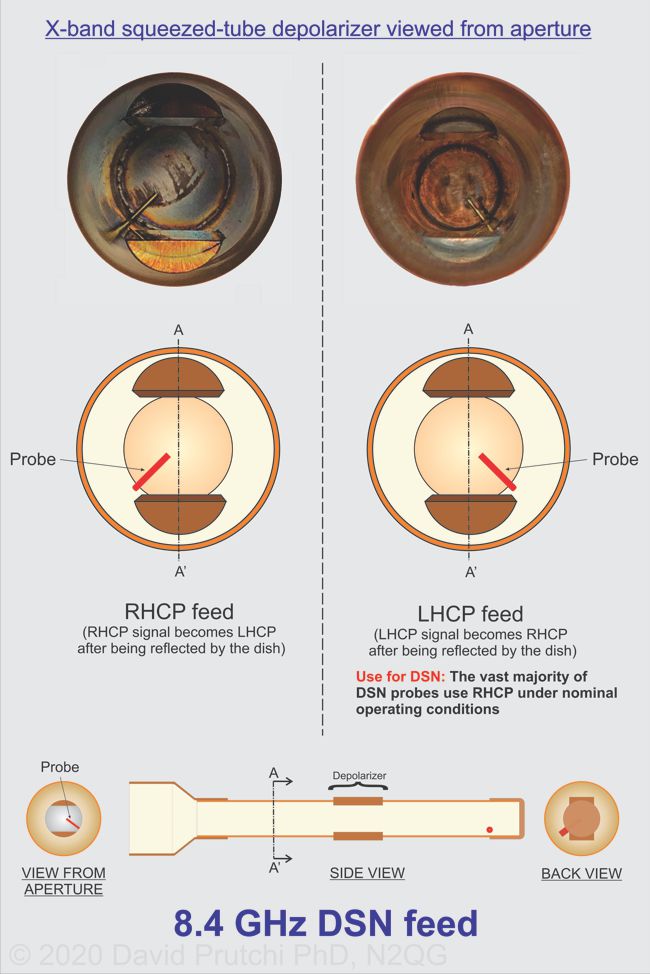 Feeds with squeezed-tube depolarizers are popular among amateur DSN enthusiasts because of their straightforward, no-tune construction.  Luis Cupido CT1DMK published a design that is often followed, and has been used successfully by Paul Marsh M0EYT, Micha? Zawada SQ5KTM and other hams interested in DSN.

Signals from planetary probes are weak, so as many variables as possible need to be eliminated when first setting up and debugging an X-band system.  One of them is the polarization of the antenna.  I found myself in that situation, and after some experimentation plus helpful answers from hams on the Amateur-DSN groups.io board, I’m now certain that I have the probe correctly oriented for DSN DXing.

As shown in the figure, an LHCP feed is needed to receive the RHCP signals transmitted by the vast majority of DSN spacecraft (when operating nominally).  This is because when the feed is mounted on a parabolic antenna, the feed’s LHCP signal becomes RHCP after being reflected by the dish.  The exception to this is for Cassegrain or Gregorian dishes, where a a secondary reflector is used to direct the energy into the parabolic reflector from a feed antenna located away from the primary focal point.  In this case, the RHCP signal becomes LHCP at the secondary reflector, and then back to RHCP again when reflected by the dish. 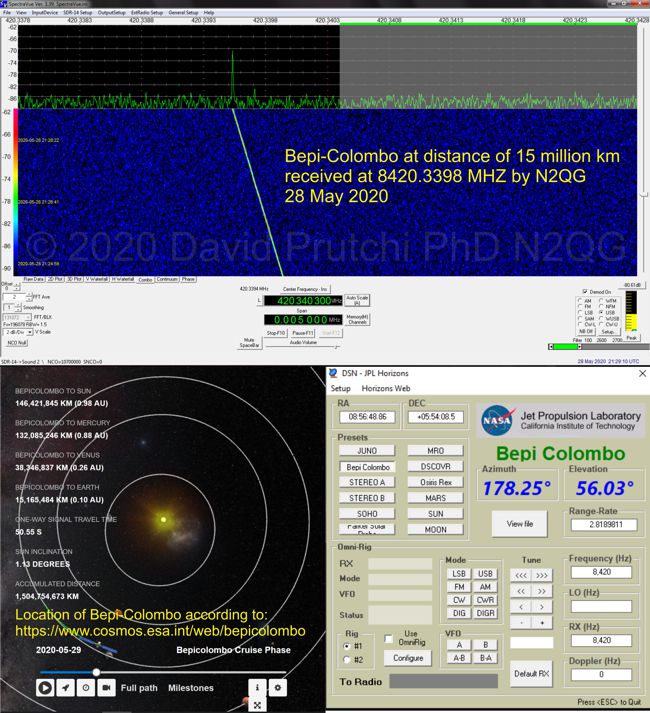 Today I was able to receive my first true-DSN X-band DX from Bepi-Colombo at a distance of 15.2 million km (around 9.5 million miles) away from Earth!

The squeezed-tube feed was made by Jason Meyers KC2TDS based on a design by Micha? Zawada SQ5KTM : 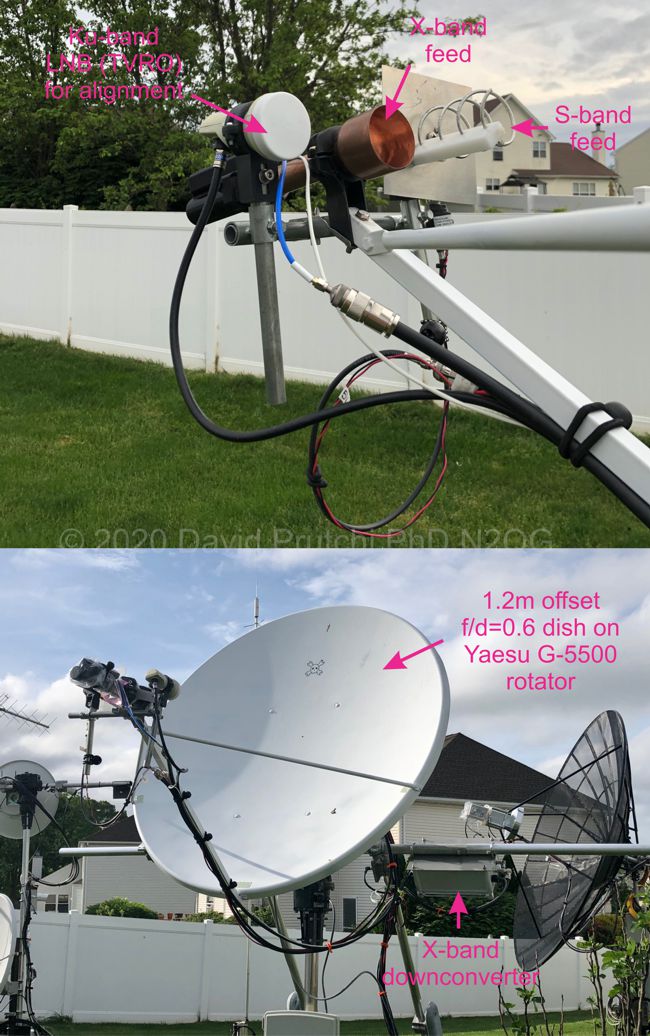 There is a Kuhne LNA-8000B low-noise amplifier connected directly to the probe, and the amplified signal is sent to the downconverter (LO=8GHz) mounted on the boom. 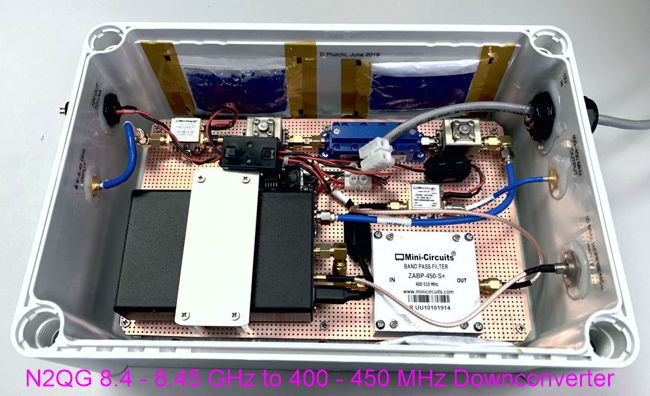 Tracking of the probe is with PstRotator’s new DSN feature which downloads ephemeris data straight from NASA JPL’s Horizons: 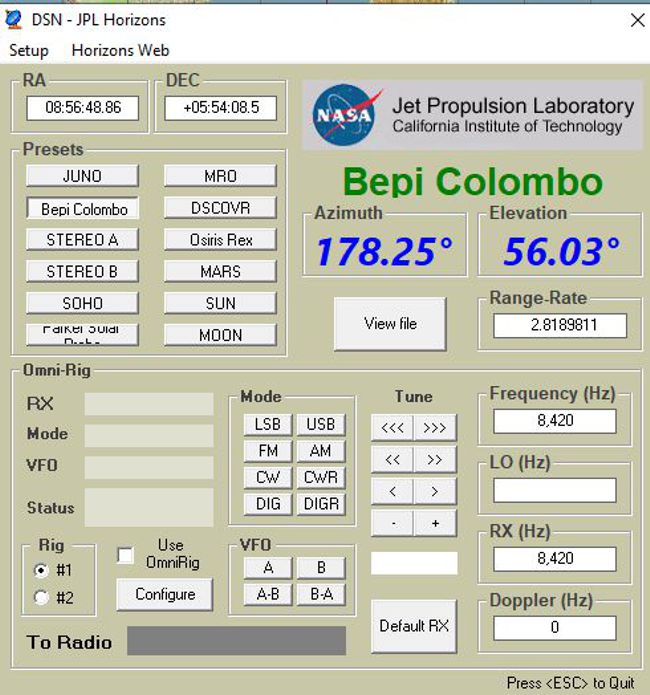 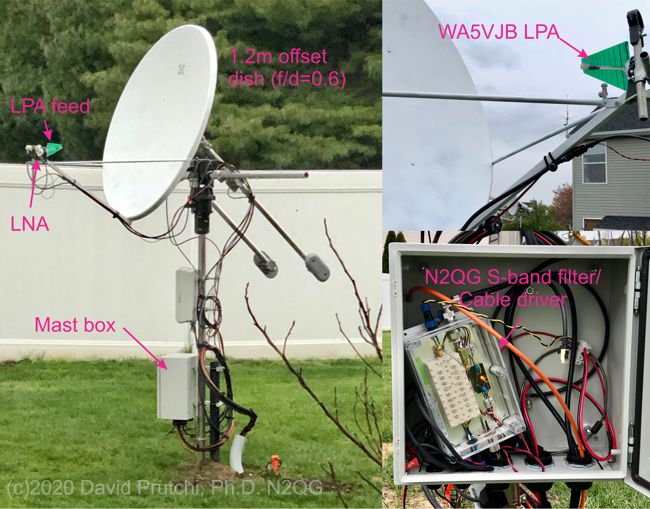 I have the aiming of the 1.2m offset dish calibrated, so it’s ready for receiving on DSN bands.  I started by placing a WA5VJB wideband log-periodic array at the focal point followed by a Minicircuits LNA.  I placed the filter/cable driver in the mast box to send the S-band signal via 100 ft of LMR400 to the shack.

With the Az/El under the command of NOVA for Windows, I set it to track DSP-F21 (USA-159).  The satellite transmits using circular polarization, so I know that I’m wasting at least half of the signal by receiving with linear polarization, but this is the feed that I have on hand for this antenna.  Nevertheless, the received signal is very clearly seen against the low noise floor: 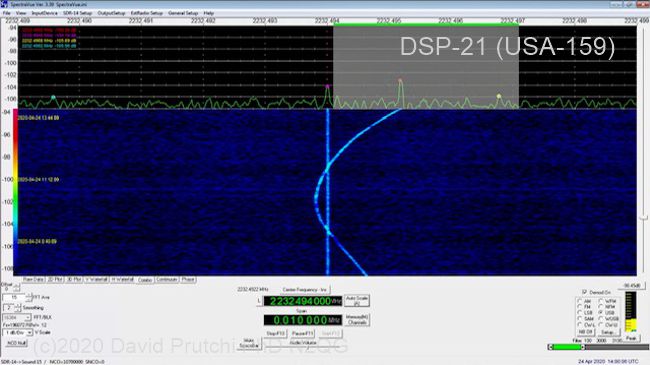 Next:  Mount the DSN x-band horn/lna/downconverter on the 1.2m dish and start to practice tracking of non-Earth-orbiting probes.

Last weekend I found that I was loosing quite a bit of power when combining the outputs of two 300W VHFDesign 1296MHz power amplifiers through a hybrid-ring coupler (rat race).  The power was going into the isolated port of the output hybrid-ring coupler, so that pointed out to a phase mismatch between the two amps.  I don’t have an adjustable phase shifter handy (bought one off eBay yesterday), so I decided to try a simple change in cable length using adapters.  Just one NF-to-NM “port saver” adapter was enough to equalize the phases at the amplifiers’ inputs such that the power appearing at the output coupler’s isolated port is now just 4W, which boosted my output to the antenna from 520W to 600W! 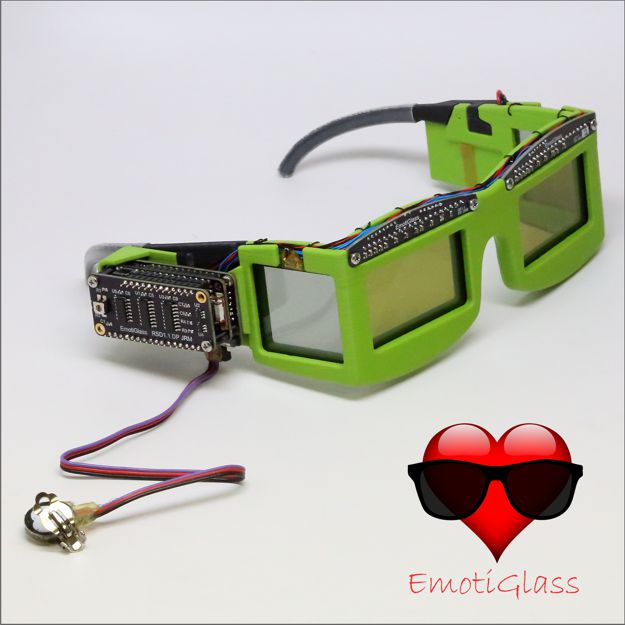 Jason Meyers and I submitted our project “EmotiGlass” as our entry in The Hackaday Prize 2018.

All augmented reality devices so far provide an interactive experience of the real-world environment that is enhanced by computer-generated perceptual information. In contrast, the EmotiGlass project explores ways in which a computer can modulate the user’s EMOTIONAL perception of reality. Our projects aims to develop the first “Modulated-Emotion Reality” device. EmotiGlass enables completely new applications in the field of augmented reality in which emotional biases can be manipulated by computer applications. Additionally, EmotiGlass has potential therapeutic applications as an aid to help control stress and anxiety.

To demonstrate and develop the EmotiGlass concept, a wearable prototype was designed and constructed. This open-source project was designed from the beginning to be easy to build using tools and materials widely available to makers and hobbyists. Full design files and detailed build instructions are available at the hackaday.io project page so that anyone can reproduce or extend the EmotiGlass design.

NOTE: The potential therapeutic applications for EmotiGlass have not been reviewed by FDA or any other regulatory agency.

A complete whitepaper is available at: EmotiGlass – v4.1 PUBLISHED – 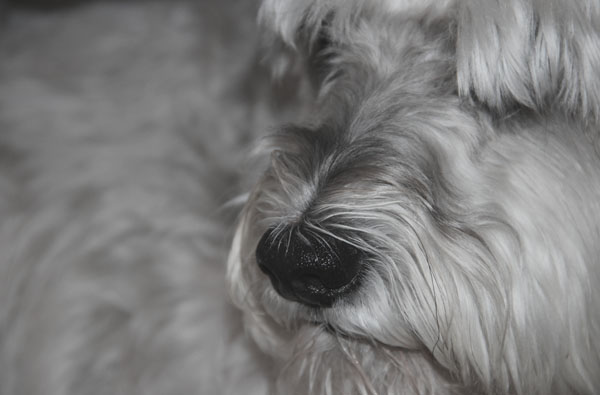 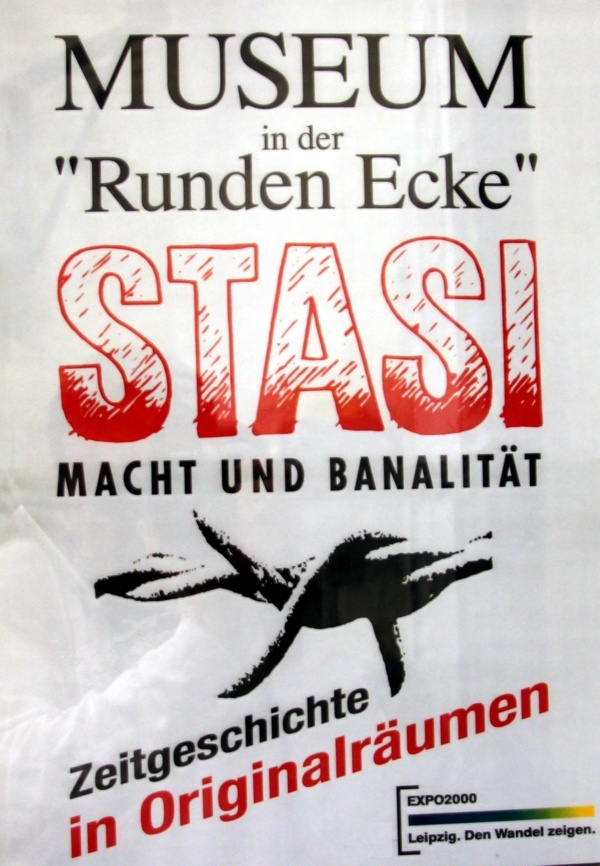 2 Weeks ago I visited one of our patients in Germany.  The hospital was close to Leipzig, and I had a few hours to stroll through town.  I went to the Museum in der Runde Ecke, which documents the power and banality of the  former district headquarters of the East German State Security Service or “Stasi” in Leipzig, Germany.  The exhibits are only labeled in German, but an excellent audioguide was available for 4 Euros. END_OF_DOCUMENT_TOKEN_TO_BE_REPLACED 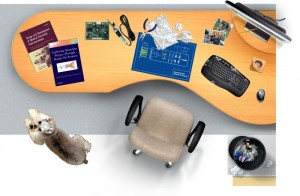 Welcome to our site, a blog dedicated to the cutting-edge do-it-yourself projects that we develop at home.

We discuss all of our other projects on this site. There is plenty of information, so take your time exploring.  Please navigate through the permanent pages, as well as through the many blog post categories listed in the sidebar to the right.

We hope that you enjoy reading our blog.