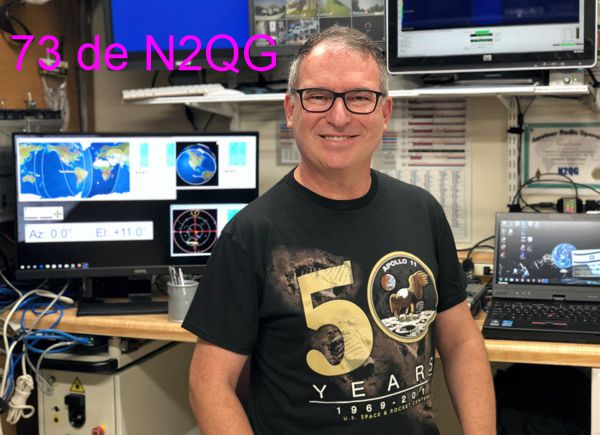 It’s July 20, 2019, and I am invited to a private screening of the CNN Apollo 11 documentary, followed by a party with my fellow nerds, so I don’t really have time today to work the sats. It’s 102ºF outside, so not a good day to tweak the antennas either, but I nevertheless wanted to do something space-related to celebrate the 50th anniversary of the Apollo 11 Moon landing.

As a compromise, I decided to test a Trivec-Avant AV2040-2 SATCOM antenna indoors to see if it would be suitable as a portable antenna in the VHF and UHF ham bands. 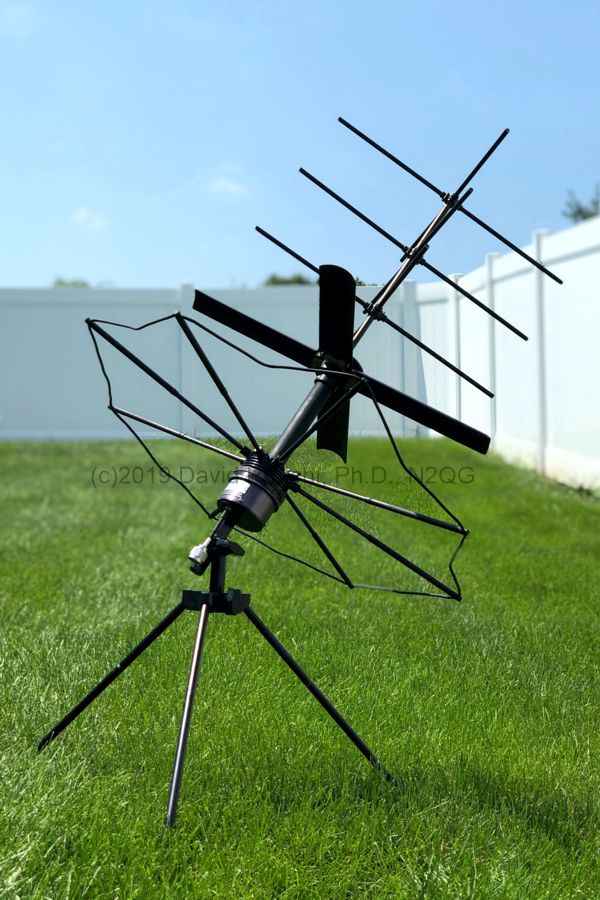 I recently purchased this Trivec-Avant AV2040-2 antenna on eBay® with the intention of using it as a portable UHF antenna for military UHF satellite communications monitoring (RX only), as well as for RX/TX in the VHF/UHF ham bands.  The AV 2040-2 is a foldable, manpack, high gain, UHF Satellite Communication (SATCOM) antenna designed for special military missions where portability and high gain are required. 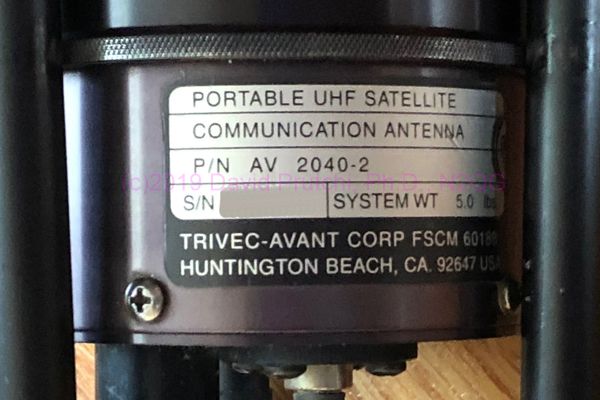 The antenna that I purchased came in good shape, with the exception that the connector had been torn out, so I crimped a new Amphenol N-male connector to the end of the cable instead of the original BNC to make connection to my rigs easier.

The AV-2040 is a crossed Yagi antenna in a partially assembled package designed for rapid deployment and directional high gain for man-on-the-move military operations.  The specified frequency range for this antenna is 240 to 400 MHz with SWR <1.5:1. The antenna includes: feed system with reflector, three sets of directors, and a tripod. 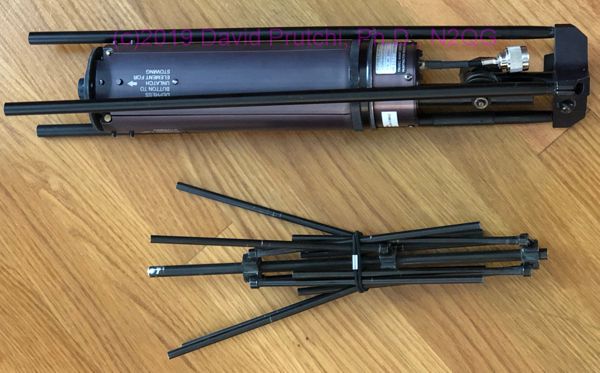 Circular polarization is valid at a narrow bandwidth of 240 to 318 MHz using an internal hybrid matching network that feeds the two flat dipole elements. The reflector, behind the fed elements, has eight radial arms that reflect the energy from the driven elements. The three element director sets focus the beam into a narrow radiation pattern for increased gain. The antenna can also work without the director sets at the cost of increased beamwidth (decreased gain).

Official specs for the AV2040 are as follows:

An original Trivec-Avant drawing for the AV-2040 is available at: https://www.mavin.com/pdf/avanttrivec.pdf

I used a RigExpert AA-1400 Antenna Analyzer to measure SWR and phase of the antenna. The RigExpert was connected to my Windows laptop to capture data. I used a run of LMR400 cable to connect the AA-1400 to the antenna, and calibrated the analyzer (Short/Open/50?) at the end of the cable.  My living room is large and the ceiling is at second-floor height, so I don’t believe that any of the measurements would be influenced in any relevant way versus taking them in an open field. 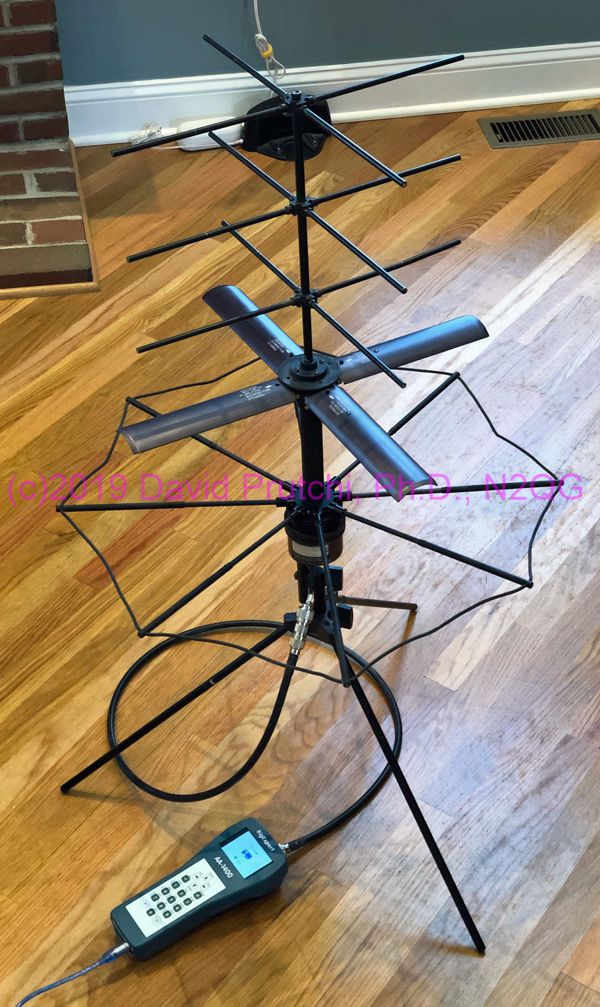 I first ran a very broadband 100 MHz to 1.4 GHz sweep, which resulted in the SWR in the following figure. The light purple background indicates the 2m, 70cm, and 23cm amateur bands (USA allocation). 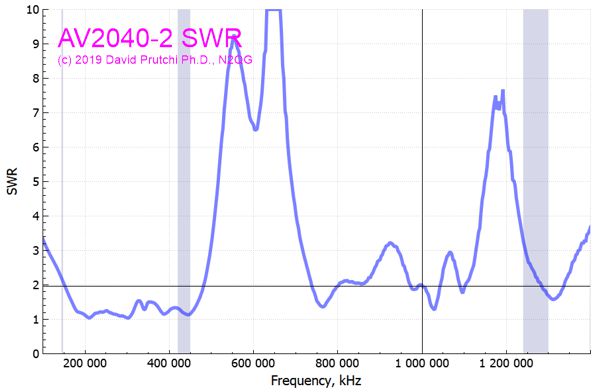 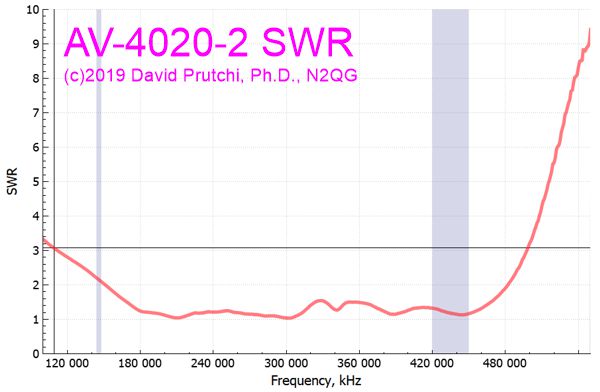 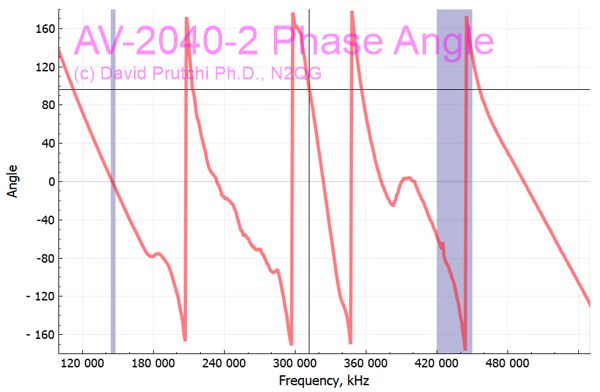 The AV-2040-2 is supposed to also work without the director elements (of course, with lower gain).  I removed the directors and compared the SWR against the antenna with the director assembly.  There is hardly any difference in SWR between the two configurations. 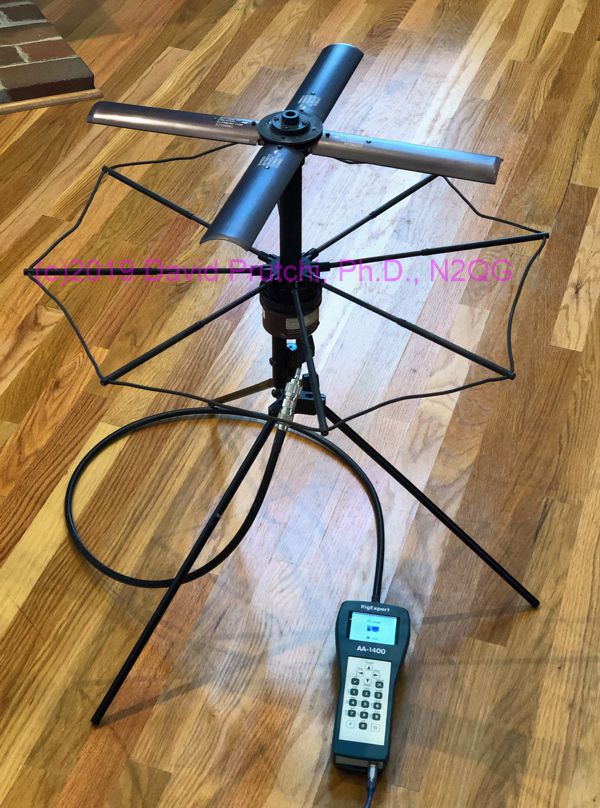 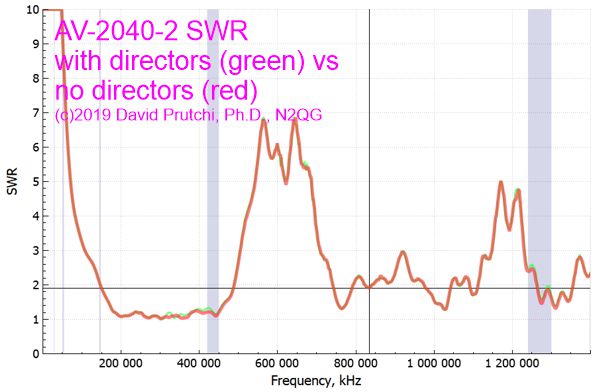 So, it looks like besides monitoring the military UHF SATCOM transponders (which are unfortunately mostly hogged by uneducated Brazilian pirates and Mexican drug traffickers), the Trivec-Avant 2040-2 will be useful as a portable antenna in the 1.25 m (220 MHz) and 70 cm (420 MHz) bands with power of up to 200W CW.

« Published data are NOT protected by copyright!
Modifying a Tek2000 12ft Dish for Az/El Rotation with a SPID BIG-RAS Rotator »